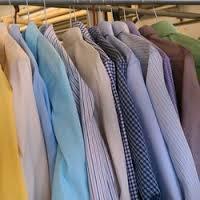 Dry cleaning refers to any procedure by which clothes and textile items are cleaned without the use of water. This might seem counter-intuitive to most of us who have been conditioned to consider water an essential component of any cleansing process, but advancements in technology and the chemical sciences make this possible.

Following is the step by step procedure your garments will undergo from the moment you drop off your load to the moment it will ready for collection.

Simultaneously, garments will be meticulously counted and examined to identify any defects such as tears in the textile or missing buttons that may be attributable to the dry cleaners. Items requiring special pre-treatment, such as those with unusual or hard-to-remove stains such as those from grease or wine will get special tags attached to them indicating this.

Dyes used in clothing which carry the risk of bleeding¡¯ or running will be sorted separately from those of more colorfast textiles in order to guard against the possibility of color transfer during the wash cycle.

Special attention is paid to ascertain the presence of certain materials or foreign objects such as plastic pens as this will dissolve in the industrial strength solvents and cause irreparable damage to the garments. Decorative buckles and fasteners that may not be solvent proof or which may not have a structure strong enough to withstand the mechanical action of the washing cycle will also be removed, to be reattached after the cleaning process or, alternatively, will have small padded protectors attached to them.

Some particularly delicate fabrics may require the placement of a protective mesh bag in order to support them against the vigorous action of the solvent, powerful mechanical action.

It should be noted that shirts do not go through the dry cleaning process but are washed using water based methods similar to household laundry systems.

At this stage, note will be made of any laundry guiding symbols indicated on the garments, according to the international GINETEX standard whose notations direct us as follows;

¡¤ A letter P inside the circle indicates perchloroethylene solvent is to be used.

¡¤ A letter F inside it indicates the use of flammable solvents.

¡¤ A bar underneath the circle indicates a mild cleaning process recommendation.

¡¤ A crossed out empty circle indicates that the garment is not to be dry cleaned.

Your typical setup will feature a holding capacity of 20 to 100 pounds of textile.

The process of dry cleaning begins with the placement of the garments or textiles into the extraction chamber. More commonly referred to as the washing chamber, this is effectively the heart of the machine, with its dimensions recalling those of a basket¡¯ or ¡¯drum¡¯. It comprises a double layered, perforated drum piece that rotates within an outer non-perforated shell.

This core is contained within a housing that also holds within it pumps, filters, recovery coils, storage tanks, filters, a control panel as well as a still.

The garments due for cleaning will be set inside the perforated drum while the cleaning solvents in use shall be held enclosed within the outer, sealed shell chamber.

Some machines make use of hydrocarbon solvents and these will require wash cycles that last up to twenty-five minutes owing to the slower rates at which they act upon solvent- soluble soils, sometimes necessitating the addition of a dry-cleaning surfactant soap¡¯.

To facilitate this cycle, the washing chamber will be initially filled approximately two=thirds full of industrial solvent, which is maintained at the temperature of 30 degrees celsius (86 degrees Fahrenheit) noting the fact that temperatures higher than this run the risk of causing damage to the textiles undergoing the wash.

Continuously through the course of this cycle, the solvent will be passed through a separate filtration chamber and back into the washing chamber whereby the system gets to be known as a cycle¡¯.

From the cycle, the solvent will then be removed and directed towards a distillation unit comprising a boiler and a condenser. The solvent, once condensed, will be directed into a unit referred to as a separator in which any water remnant is separated from the solvent which will then proceed on its journey to a tank designated to hold the clean or pure solvent. The solvent flow rate for most machines stands at approximately eight liters of solvent per textile kilogram each minute, depending on the size of the machine.

This the machine achieves by increasing the rate at which the washing chamber spins upon its axis to a range between 350 to 450 rotations per minute, causing the solvent to be forcibly spun free of the textile fabrics.

Note that up to this stage in the washing cycle, cleaning is taking place at temperatures that are below human body temperatures and only ten degrees above room temperature as the dry cleaning process does not employ the application of heat to the solvents.

The temperature is kept within these limits to safeguard the integrity of the fabrics.

Warm air exhausted from this step, laden with excess solvent, will then be passed through a chiller unit to be condensed and subsequently returned to the distilled solvent tank. Modern machine models employ closed-loop systems which trap, reheat and recirculate this chilled air, which in the past would be released into the atmosphere as people were not aware of the harmful effects perchloroethylene had on the environment.

With this step completed, an aeration or deodorizing cycle will serve to cool the garments and reduce any remaining traces of the solvents by passing cool air over the textiles and then through a polymer fiber and activated carbon filter, leaving the garments ready for their finishing touches.

There exist numerous stain types that will prove troublesome throughout the cleaning process and will remain on the textiles after the drying cycle. These include;

¡¤ Tannin stains set in by time and heat

¡¤ Quick drying to reshape the garment

¡¤ Vacuum removal of the steam

¡¤ Application of pressure to the textile

Perchloroethylene (tetrachloroethylene), or Perc for short, which is considered to be the standard in terms of cleaning performance among all the solvents available and which is the most commonly used. It has an uncommon smell, which is the smell most people associate with dry cleaning.

Supercritical carbon dioxide, rated as being superior from an environmental standpoint, however, remains unpopular due to its lower cleaning ability and prohibitive machinery cost which keeps it out of reach of small to medium sized businesses.

Consumer grade home dry cleaning products exist on the market such as Proctor & Gamble¡¯s Dryel¡¯ which though effective against certain stain types of varying degrees cannot be compared favorably to the professional dry cleaning process in terms of efficacy and efficiency.

DEALING WITH DRY CLEANING WASTE
Considering the hazardous nature of the waste by-products of the dry cleaning process, posing dangers to public health, the disposal of such materials is placed under regulation and is subject to numerous restrictions.

The waste that is generated through the distilling of muck will contain powdered filter material(diatomite), non-volatile residues, lint, grease, oils, dyes, carbon, soil and water.

Classified as carcinogenic(cancer-causing) substance, government regulations call for the specialized handling of it to prevent its introduction into a population¡¯s drinking water. When it comes into contact with air, Perc will contribute to the formation of smog through its reaction with volatile organic carbon substances. The state of California is set to declare the use of Perchloroethane illegal in the year 2023, setting the stage for the full embrace of the carbon dioxide based dry-cleaning method.

Environmental considerations have driven the demand for more eco-friendly products and systems within the dry- cleaning industry, with governmental regulations coupled with increasing consumer awareness driving the initiative. Focusing on the major pollutant involved in the process- the solvents, carbon dioxide-based cleaning technology has been developed to minimize the environmental impact of the dry cleaning process.

A naturally occurring substance, carbon dioxide exists in a gaseous state at room temperature and as dry ice at sub-zero temperatures. With the application of pressure (several atmospheres), it will take on a liquid state. In this form, it will assume a gas-like consistency with a very low surface tension which makes it very effective as a cleaning medium when used in combination with detergents. Not requiring the heating of garments to be effective, this method places considerably less stress on the garments undergoing the dry cleaning.

In summation, it is worth noting that the heavily industrialized systems and processes we employ in the dry cleaning procedure, while somewhat harmful to our environment, remain our most elegant solution for the moment. Hope remains, though, for, with the never-ceasing forward march of technology and science, more efficient and earth-friendly solutions surely lay close at hand.